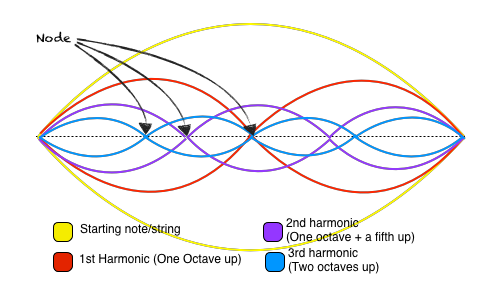 Artificial Harmonics
Artificial (or stopped) harmonics are just like regular harmonics except that the vibrating string length is shorted by a finger (usually the index finger on violin/viola or thumb for cello/bass), and has another finger (usually the pinky) lightly touching the string creating a harmonic.  If a violinist puts their first finger down on the D string as if playing the note E, and then touches the string with his fourth finger as if  to play the note A the string would be divided in quarters, and play an E two octaves up.
Notated
A harmonic can be notated in a few different ways.  The first way would be to write the note that should sound with an "o" written above it (example 1.).  A composer can also write where the finger should be placed to create that harmonic by writing a diamond for the note head (example 2.).  Usually the composer will indicate what string the harmonic should be on with sul D or a roman numeral.  For the diamond notation the composer may also write the open string/stopped note with a regular note and a diamond for the harmonic (example 3.).
Performing Tips
You can play the same harmonic note by touching the string near the bridge as well as near the nut (back of the fingerboard).  The first harmonic is in the center of the string length (about one inch before the edge of the instrument body).  Learning where the other harmonics are higher on the instrument just takes practice to gain the muscle memory, but playing them lower on the instrument is quite easy.
Tuning with harmonics
Because harmonics will only sound on specific pitches, you can tune your strings fairly accurately by playing harmonics.  The first harmonic of one string should be the same pitch as the 2nd harmonic of the string directly below it (For double bass it is second harmonic, and third harmonic of the lower string).  If the A string is in tune and the first harmonic is played (center of the string) it should match the same pitch played when touching the 2nd harmonic on the D string.  If the note on the D string sounds more flat compared to the A then you know that the string itself is flat, and can tuned from there.