“What is the difference between major and minor?”  I love asking this question because I usually get some sort of answer like “Major sounds happy, and minor sounds sad.”  This is a great answer!  It is great that we equate emotions to sounds.   I would like to break it down to a more simple form though.


All major scales have the same pattern.  Most people have heard, and at some point sang Do-Re-Mi-Fa-So-La-Ti-Do.  That is a major scale.  It doesn’t matter if you play/sing D-Major, B-Major, or F#-Major, they will all sound like that infamous Sound of Music song.  Another way we can look at it is to see what notes are close together.  This is easier to do looking at a violin, or a piano.  In a Major scale the 3rd, and 4th note are close together (Mi^Fa), as well as the 7th, and 8th note (Ti^Do).  The specific notes that are close together is what makes the major scale pattern.


Minor scales have a different pattern than major, but all minor scale patterns are the same. When we switched to d-minor we now have (E^F) the 2nd and 3rd note close, as well as (A^Bb) the 5th and 6th note close together.
Now we come to the tricky question of what is minor.  There are multiple ways of going about this.  The way I was taught in grade school was that you take your major scale, lets say D-Major, and lower the 3rd, 6th, and 7th note. 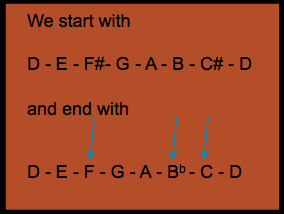 Although this give a way of figuring out what the difference would be between a major, and minor scale beginning on the same note this does not help us fully understand the relationship between major, and minor.  This is the point where my lesson in school stopped, and I went home trying to remember all the numbers of which ones were lowered, and which ones weren’t.  There is a much easier way of going about this.

Lets start with a major scale.  Since we have used D-Major already, we will stick to that.  Our key signature has two sharps in it (F#, C#) we play a scale:

D - E - F# - G - A - B - C# - D
Lets not worry about how to find d-minor, lets find what the relative minor is.  What that means is that we will not be altering a single note, all we are going to be doing is starting the scale on a different note.  More specifically, we will be starting the scale on the 6th note.  The 6th note is B.  Now lets play the notes that are in the D-Major scale, but go from B to B.

b minor
VOILA! we have a minor scale.  b-minor has the same two sharps as D-Major, they are relative, and in a way they are the same scale.  If we wanted to go back to the Sound of Music we would hear La-Ti-Do-Re-Mi-Fa-So-La.  I don’t think the song has the same kick anymore, but you get the point.

Yes major can sound happy and minor can sound sad, but the main difference between major and minor is that they are different patterns, and that minor is major just starting on a different note.